Crown Bioscience offers a robust assay suitable for small and large screening experiments to study Cystic Fibrosis (CF). Organoids are grown in our unique 3D 384-well platform technology, where patient-derived organoids’ phenotype and function can be recovered with the addition of standard of care treatments, such as TRIKAFTA®. 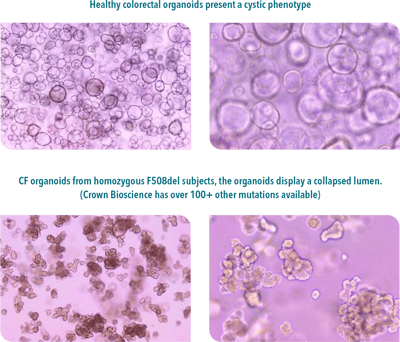 Patient-derived CF organoids are embedded in a 3D extracellular matrix in 384-well plates. Organoids can be exposed to different CFTR modulators at different timepoints. To induce a swelling response, the cAMP inducer forskolin is added for three hours, after which the cultures are fixed, stained and imaged. Thereafter, nuclei, organoids and lumen are quantified using in-house developed image analysis software. 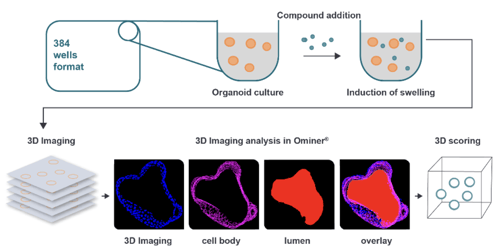 CF F508del/del organoids were seeded in 384-well plates in 3D and exposed to single CFTR modulators or combinations. Forskolin was added to induce a swelling response. Organoids were quantified with 3D image analysis software.

Graph A shows individual dose response curves of the different components of TRIKAFTA. All of the compounds show an increase in lumen area, with VX445 (orange) giving the strongest effect.

A single dose was chosen and tested in combination, of which the data are shown in graph B. Different effect sizes can be measured after addition of the different type of CFTR modulators, with the highest increase observed when the complete TRIKAFTA mixture is added (final teal bar).

Quantified lumen area after treatment with CFTR modulators as compared to solvent control (0.2% DMSO) and stimulant only control (forskolin). Data presented as the ratio between lumen and organoid areas (avg., N=4). 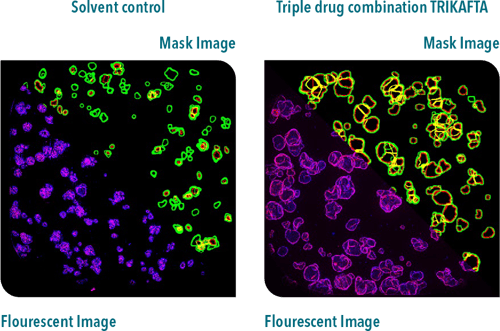 When untreated, organoids have little to no quantifiable lumen that swell after stimulation with forskolin, however after treatment with TRIKAFTA, organoids are able to swell and present with a clear lumen.

3D image analysis provides robust quantification of phenotypic changes, allowing accurate response matrix measurements, such as the combination of VX445, VX661 and VX770 in a 8x6x4 matrix in 3D cultured CF F508del/del organoids. Data is presented as the ratio between lumen and organoid areas (avg., N=4).